The next one counts…

I spent my Saturday night traversing to Hershey to take in the final exhibition game of the WBS Penguins preseason. A 5-1 loss. Braden Holtby started and played all 60 for the Bears. Stopped everything he saw. The one shot he didn’t see was a Jason DeSantis shot because he was screened. There was bad blood. So, your typical Bears / Pens tilt on a Saturday night.

I was able to snag these two pictures you will see after the jump: 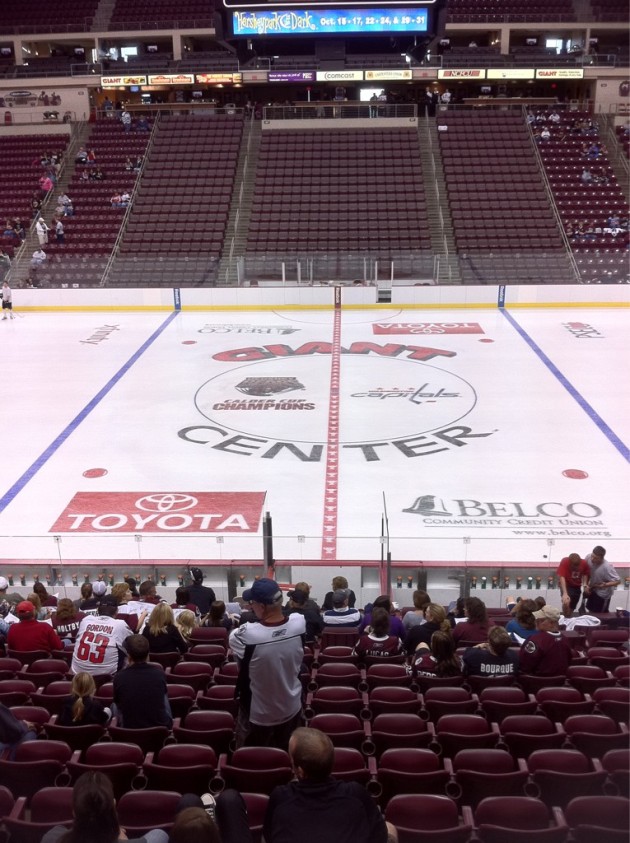 Nice touch with the Center Red outline, which is outlined in Calder Cups. Smoke ’em if you got em.

The arena is actually a very nice arena. One of the nicest I have been in, and I have been in many. The MTS Centre in Manitoba is probably the nicest non-NBA arena, but the GIANT Center would probably be a close second.

I’ll be back later today to discuss the Penguins Preview Jonathan Bombulie did in the Sunday Citizens’ Voice. I’m not going to give it all away on the blog, because it’s a print version you have to buy and JB has to feed his family. If The Voice puts a link to it later I may run it here. Quick preview though: Hershey is (again) the team to beat and one of the “Cases Against” WBS this year could be depth at center. I’ll be back later!