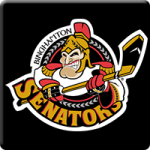 Last Game: Last night at home against Hershey, the Pens won 5-1. Tom Sestito scored two goals, picked up an assist, and fought Tyler Lewington to give himself a Gordie Howe Hat Trick. For Binghamton, the Senators beat the St. John’s IceCaps at home in a shootout 2-1. Chris Driedger stopped 36 of 37 and 2 of 3 shooters in the shootout to earn first star honors.

Last Meeting: December 31 in Binghamton, the Senators won 3-2. Jason Akeson scored a pair of goals and Chris Driedger stopped 44 of 26 shots sent his way to pick up first star honors. Jake Guentzel and Sahir Gill scored for the Pens in the losing effort.

Why you should care: Pens are looking to avenge that loss last weekend against Binghamton. The B-Sens are coming in on a quiet four game winning streak. Do not underestimate this team. Pens will need to play tonight like they did last night against Hershey.

Other Game to Watch: Both teams in the Albany / Lehigh Valley matchup tonight are looking to avenge losses the night prior to last place teams (Utica to Albany and Hartford to Lehigh Valley) – one good team its heading into Sunday on a two game losing streak.