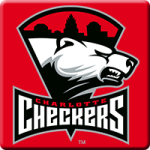 Last Game: Saturday at home against Grand Rapids, the Penguins won 2-1. Adam Johnson scored a shorthanded goal, Kevin Czuczman scored in the third period and Anthony Peters stopped 32 of 33 shots. For Charlotte, the Checkers beat the Hartford Wolf Pack 7-3. Alex Nedeljkovic scored a goal. Why does this matter? He was the goaltender.

Why You Should Care: Checkers come into tonight winners of four straight looking to make it five over a Penguins team they have had the number of. Both teams are gunning for a playoff spot, so expect another closely contested affair tonight in Charlotte.

Other Game to Watch: Everyone in the Atlantic Division will be watching us, so in the Central, Iowa visits Rockford in a Central Division contest.