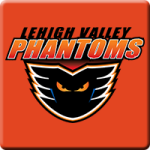 Last Game / Last Meeting: Last night in Allentown these two teams played an instant classic where the Penguins came out on top 5-4. The Penguins gave up two power play goals in the third period before Teddy Blueger scored on a power play goal and then Garrett Wilson scored with 63 seconds left to lift the Pens pas the Phantoms. TJ Brennan for the Phantoms had a goal and an assist.

Why You Should Care: If last night was any indication on how this series is going to go between these two sides, then buckle up. The Phantoms will be looking to exact some revenge on the Penguins while Wilkes-Barre will be looking to button up in the discipline department on Lehigh Valley so as to not allow for so many power plays. Expect more of the same and another thriller between these two rivals.

Other Game to Watch: Can Hershey, who lost in a shootout last night in Charlotte, hand the Checkers their first loss of the season?