Alexander Nylander came back and only scored one goal.

You remember him, the guy that sick last weekend for the Wilkes-Barre / Scranton Penguins whom you all missed, myself included?

Nylander’s goal was overshadowed by a big night from Sam Poulin, a hat trick, along with goals from Felix Robert and a returning Chris Bigras as the Penguins pound the Laval Rocket Saturday night 6-2.

This blog post should have been titled, “A Night of Returns” because Louis Domingue started the game for the Penguins, after missing the last few months with injury, and opposed L-P Guindon.

Here’s how they lined up:

Lineup Notes: Plenty. I mentioned some of them at the top. Jamie Devane also returned from injury. The Pens loaded Jan Drozg to the Grand Rapids Griffins. If you have been following the story close enough, Drozg wanted out and the Penguins gave it to him. He was a restricted free agent and likely will not be signed by Pittsburgh this summer. Alex D’Orio was sent to Wheeling.

First Period: Poulin scored 1:15 in and they were off to the races. But Joël Teasdale scores :25 later and Laval ties it right back up again. Then, A Chris Ortiz shot hits the post and Poulin is there to put the rebound in to make it 2-1.

Laval was bombing the Pens in shots in the period. But then a Chris Bigras shot goes in and that was the end of L-P Guindon. Enter Kevin Poulin, who settled things down considerably for the Rocket.

Here are the goals in the order they were scored.

Chris Ortiz should not come out of the lineup. He has been very good.

Second Period: No scoring. Laval had a power play late where they had their top unit of Dea, Harvey-Pinard and others and shot a lot at Domingue but the Penguins net minder held them out.

Third Period: Alex Nylander on a power play when Poulin was knocked over in front of the net and it was 4-1 Pens.

#WBSPENS GOAL VIDEO – Alex Nylander is back in the lineup and back in the goal column. pic.twitter.com/1EALL7fcym

But then J-S Dea set up the aforementioned Harvey-Pinard and he typed one home for a power play goal that cut it to two for the Rocket.

1:12 later, Felix Robert scores to ice the game away, blasting through the middle of the ice to score and re-establish the Pens three goal lead.

Laval pulled Poulin with seven minutes left and our Poulin put it in the net of Poulin for the empty net goal and his first professional hat trick.

The Good: Felt good to get one where you were in complete control for most of, if not all of the game.

The Bad: Baptism by fire for Domingue, who faced 39 shots, no flies on him though and he’s ready to go and be your number one goalie going forward.

Turning Point: I want to go with that sequence where Laval doesn’t score at the end of the second period on the power play there., but Felix Robert’s goal that re-establishes the Penguins three goal lead gets it here.

Around the Division: Springfield beats Charlotte 4-3 in overtime….Bridgeport pounds Providence 7-4….Lehigh Valley beats Hartford in a back and forth one 6-5.

Standings: Pens will gain some ground on idle Hershey at the five seed, but put it this way, both team are playing the same number of games and the Bears have 63 points and the Pens have 56. Pens still have a game in hand and I think one or two games left with Hershey. Improbable, not impossible.

Pens have a five point lead on Bridgeport.

Wheeling Update: Nailers down big against Reading, and I mean big. Box here.

The Force was with Sam Poulin on Saturday night. The #WBSPens rookie picked up his first pro hat trick, as the home team downed the @RocketLaval, 6-2, on @StarWars Night.

Postgame Highlights are courtesy of the @PaLottery pic.twitter.com/zS2LRWvkg5

Don’t forget to turn your clocks ahead. More Sunday after the Pens host the Hartford Wolf Pack. 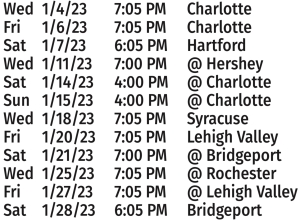