I met this guy by the name of Joe. It was his first hockey game. His friends told me if the Penguins won the game tonight, they would call him 1-0 Joe.

Penguins win 2-1 over Laval Friday night and Joe, buddy, you have a new name. Wanna change it? See you Wednesday when the Penguins host the Cleveland Monsters.

I don’t know if this was a masterclass in defense and goaltending or a young team learning to come together and put a full 60 minutes together because in the first period, it looked like the Pens were set to run away with the game, up 2-0 heading into the second period off of a power play goal by Alex Nylander and a breakaway goal by Nathan Legare. Dustin Tokarski started in net and wasn’t challenged much if at all in the opening frame.

Lineup Notes: Jonathan Gruden made his season debut. Sam Houde was back from the cut suffered on his face last Saturday. Raivis Ansons and Lukas Svejkovsky yielded. Defense was intact.

First Period: Coupla quick goals from the more rested Penguins who were idle on Wednesday and not in a foreign country, unlike the Rocket, who hosted Springfield. It was a sense of bus legs I think because the Rocket were flat and took three penalties in the period.

Nylander opened the scoring with this power play goal.

Alex Nylander starts off the scoring in #LAVvsWBS for the @WBSPenguins. pic.twitter.com/HLou6N0pH2

Followed by Nathan Legare on a breakaway set up by Sam Houde.

Second Period: With virtually nothing to do in the first period, Dustin Tokarski was a very, very busy man for the Penguins in goal in the second period. Laval came alive with plenty of good looks and good opportunities, but Tokarski was dialed in and denied them all.

Third Period: More of the same from the second for the Penguins. Time was whittling down and the Penguins were in firm control of the game I thought. Whatever happened to get through. Tokarski would get a piece of.

Then, the Penguins found themselves on a late penalty kill. With Primeau pulled, Laval would get within one with a lot of time on the clock.

I know what you were thinking, here we go again with the empty net goals late in a game that the Penguins are in control of.

Tokarski with some more key saves late, including a block by Jon Lizotte and Wilkes-Barre holds on.

The Good: At times they kept it simple. Defense was dialed in and the goaltender was laser focused.

The Bad: They do everything right and lose a shutout for their goaltender late with an extra skater on a puck over glass infraction.

Turning Point: You didn’t know it at the time, but the Legare goal that made it 2-0 in the first is enough to get the Penguins to the pay winda first, daddeh.

Around the Division: Hershey had a 3-0 lead in Charlotte but that evaporated quick and the Bears lose 5-4….Springfield beats Belleville 5-2 to earn the Thunderbirds their first win of the year….Bridgeport beats Providence 5-4 in overtime.

Wheeling Update: The ECHL got going tonight, but the Nailers play Saturday at home against Toledo.

The #WBSPens got first period goals from Alex Nylander & Nathan Legare, as well as a 26 save performance from Dustin Tokarski, to pull out the 2-1 win over the @RocketLaval on Friday night at the @MoSunArenaPA 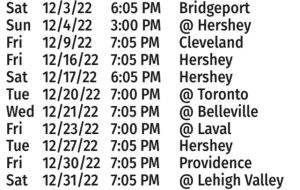